Rayman, Globox and Teensies have been asleep for a century and during their deep slumber the Magician has returned, now with even more power than before as he splits into five “Dark Teensies”. When Rayman and Globox are finally woken by their friend Murfy, they realize that the Teensies and 10 princesses of the lands are kidnapped in these five nightmares made by the Magician. There is only one thing to do of course – they set out on a quest to free them!

For those who have never played any of the Rayman games before you can expect an amusing, challenging and extremely beautiful platform game with Rayman Legends. The game music is harmonic and more often than not you want to follow the rhythm of the game and notice that the music is actually matched with the desired pace of the game. For the music lovers out there, the final stage of every game world is a musical stage; in my opinion I would say it’s more of a musical tribute. Songs such as “eye of the tiger” play in the background and your every move is calculated so when you jump to reach across to the next platform, a drum beats, when you catch a chain to slide, there’s a guitar solo starting and all along the stage elements such as described is mixed throughout. All you need to do is follow the rhythm as the beat guides you.

To get to those musical stages, you have got to defeat the Dark Teensies. And if you successfully defeat four out of five you get to go to Olympus Maximus where you will face a giant cloud of pure nightmare. This boss is actually kinda scary and you have to be super quick in those gamer hands of yours to shoot the nightmare down. If you finally manage to beat this beast of a nightmare, the credits will roll. But don’t worry, it doesn’t end here.

When it comes down to freeing teensies, for the completionist – there are a total of 700 of them to find and set free. However, if you do manage to free 400 of them you unlock another world of the game called “Living Dead Party” where the adventure continues. But there is more to do in the game than just defeating the Dark Teensies, there are daily and weekly challenges where you are set up with mini missions That you either have to finish in a set time frame or where you have to catch a set number of lumes. You can also bring your friends in to play a game of “Kung Foot” which is basically two goals in each end of the screen and a soccer ball to kick around – made to add a competitive element to the game.

Do you feel hooked? This game is platforming at its best and everyone can play it. Hand the ps4 controller to your ~7 y.o kid or try some stages for your own and you’ll see that it’s addictive. There is a co-operative mode for those who want to bring over some physical friends to play alongside with them; there is a leaderboard for the competitive individual that can be combined with the online missions that update daily and weekly. So, make sure you find some time to free some teensies! 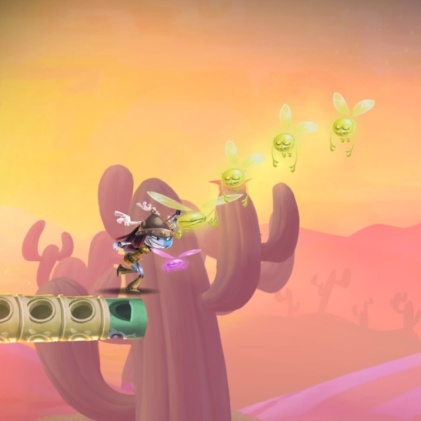