Ok.. seriously… as you might have noticed we looooove the Halo franchise. As soon as we began this EPIC ADVENTURE our hearts started racing and our eyes almost popped out of their sockets when we got to see the most epic intro cutscene EVER! Locke and his team flies with jetpacks towards a random planet filled with WAR and Covenant and Prometheans and they start slashing their way through with smash attacks, guns in the faces shooting brains out, breaking legs, crushing bones and being utterly awesome! Ending with a gameplay cutscene where Locke shoves a SWORD up an elites throat!! PURE AWESOME!!!!!

But….. there are some let downs… first of all we LOVE Master Chief! Master Chief is the equivalent of AWESOME! It has been an extraordinary journey to follow Master Chief in his mission to save the world repeatedly, and we have fallen in love with his bravery, his persona, his achievements and the mystery behind his person. Now it feels like they have put Master Chief aside a bit… in the shadows 😦 There are in total 15 mission, you only play as Master Chief in 3 of them. Spartan Locke is the main character of this game. It still feels like you’re playing Halo though, even when you’re playing as Spartan Locke and his team, it’s just.. deep down inside, you know.. Master Chief is not there.. and you’re actually hunting him down.. like an animal :(((

A new cool ability though is that you can rush and smash things. It makes you feel powerful and invincible! (Unless you’re playing on Legendary where this ability most likely gets you really killed…) Heidi almost always has full ammo on her guns now, since she has completely changed her playing style into smashing and rushing into enemies instead of aiming at their heads! XD There are of course some people who do not find this ability to be quite “Halo”, but we appreciate it, and think it’s a cool addition. If you don’t like it, then don’t use it (unless you wanna enter a secret cave that requires you to smash open some stone blocks in your way, then you have no choice! Hah!) 😉

One thing that pissed of some friends of ours though is that they have completely abandoned local co-op! It’s great that you can co-op up to 4 people, but that requires you to have online friends, if you don’t then there’s no matchmaking for co-op. If you want to sit in your couch together with your best friend who you’ve played through every single Halo campaign with, then you’re screwed.. No Halo for you! In co-op at least.. It’s scary how everything is turning into relying completely on internet connectivity and online activity. What about those poor souls that live on the countryside with shitty broadband connections of 1.2 Mbit? (Yes, we’re referring to Heidi…) >_<

This is what gameplay on a bad internet-day at Heidi’s can look like >_< OMG the laaaaaaag!!

An online co-op feature that’s new though is that you can revive each other! If you don’t have any online friends you will have to rely on the *cough* very intelligent *cough* AI’s to save you. If you have the benefit of having online friends then they can revive you… if they make it on time(!) and if you’re not being blown to pieces because then you go automatically into “waiting-to-respawn”-mode which can take FOREVER! Sometimes up to over 60 seconds! Ridiculous.. Who wants to play a game just to die and wait to get to play again? Those seconds seem to last forever most of the time 😦

They’ve also added some new elements into gameplay which are kind of like an RPG. In three stages you have to walk around and talk to people in a colony type of setting. This is retarded.. I’m playing an FPS game, I do that because I want to run around and shoot shit! FIRST-PERSON-SHOOTER. These kind of things are not suitable..and just annoying to play through… the story that they’re trying to tell with this might as well have just been a cutscene! Thankfully they’re quite short and you can just run through the few waypoints that are there if you want.

We haven’t tried out the multiplayer that much yet, but we had to try out the new Warzone mode just to see what it was like. You’re two teams and you kill mini-bosses and a big boss basically. There are various positions you can hold to gain points. In your base there’s a station where you can receive upgrades, like better weapons, vehicles, perks etc. The range of stuff at the station depends on which and how many cards you’ve acquired. These cards can be awarded through playing the game, but you can also purchase them with real money. This means newcomers can obtain tanks, rocket launchers and whatever they please as long as they have the cash to spend. Of course you have to play a bit into each game before they unlock, but I’m still not comfortable with micro-transactions taking over the multiplayer world of Halo…

Halo 5 Guardians is a beautiful game though! The colours, settings and scenery is very “Halo-like” and it’s a joy to look at and explore 🙂 We will still always looooooove Halo ❤ 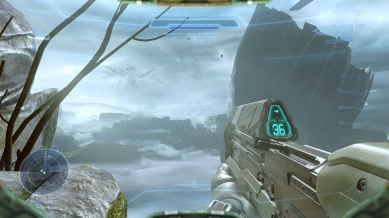 There’s light at the end of the tunnel!

And of course there’s some glitches appearing in this game as well, like all games today! Here’s Heidi, after having spawned in an impenetrable glass box XD WTF!

So frustrating!!! Thank god I spawned with grenades!

We (especially Becki) would also like to recommend the animated series (or the book, with the same name, by Eric Nylund), Halo: The Fall of Reach, that was released at the launch of Halo 5 Guardians. In three episodes we get to follow Master Chief and his fellow Spartans from a young age and see how they become Super Soldiers. It’s a really interesting story with a lot of morale in it. What is humanity ready to do to create a super weapon? This series gives you more knowledge about the Halo universe. Previously there were the Halo Legends, Halo 4 Forward Unto Dawn and Halo Nightfall series. The two first are ok but Halo Nightfall sucked! This new animated series is by far the best!

** This article contained the joint expressions of Heidi and Becki. **