I’ve been collecting video games for 15 years, mainly because I never got any home consoles as a kid. So video games have always been “more fun” to me, playing with a joystick or controller and hooking a system up to your TV. That is gaming to me, I did however have my own PC when I was a young teenager, so in the lack of video game consoles I found downloadable DOS games for my PC.

I haven’t really reflected upon these games until recently. I fondly remember playing ToonStruck and a few other CD ROM and PC games. The other day I found out about a DOS emulator called DOSBox, available for both Mac and PC! 😀 And I started hunting down old DOS-games 🙂

I found a site called DOS Games Archive that was filled with Freeware and Shareware and when scrolling through all the various games available there I found a few that I remember playing a lot when I was young! One of them was SkyRoads which I had completely forgotten about!

SkyRoads is kind of a racing game in space. You accelerate by pressing up on the keyboard, and down slows your ship. Left and right steers you and the space bar makes your little ship jump. It’s funny with a space ship that apparently can’t seem to fly, but jumps 😀

SkyRoads Into the Sun

SkyRoads Into the Sun stage

Various stages have different conditions, the Grav-O-Meter measures how much gravity the stage has. In some stages you can jump higher and longer, and in others you can barely leave the ground because of the gravity. There’s also various colours on the floor, where some might slow you down, speed you up or even make you explode on instant contact! You have to navigate your ship to the end of each level without running out of fuel, so you can’t go too slow. Meanwhile you have to avoid falling into the depths of space or crashing into blocks, walls or the occasional fake tunnel 😀

SkyRoads Over the Base 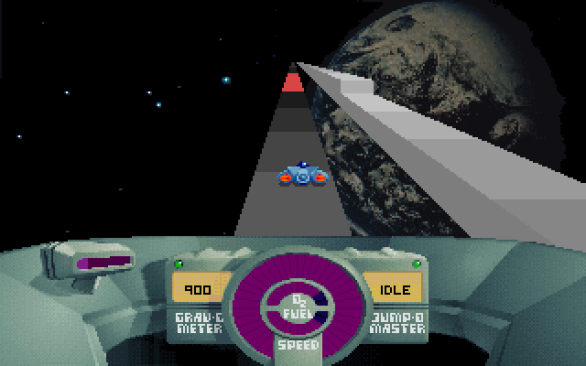 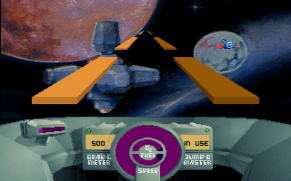 SkyRoads is a great game, the controls are very smooth and the feeling of jumping around with your ship is just pure joy! The stages increase in difficulty and it’s quite challenging to attempt clearing them all! There’s also loads of different soundtracks for various stages, it doesn’t get repetitive even if it’s basically the same concept through all the stages. Another positive feature is that if you’re stuck on a stage you can just leave it for a bit and continue on the following stages, you don’t have to clear a stage to continue.